My love affair with indie bookstores began when I moved to Berkeley in 1990. Telegraph Avenue was just a 15-minute bike ride from where I lived, a mecca for new and used books, Moe’s, Cody’s, and my favorite, Shakespeare & Co. I loved the smell and feel of used books. Opening one that had belonged to someone else gave me a sense of connection with the previous reader. Sometimes I’d find a book plate on the inside cover with a name, or a handwritten note if the book was a gift. I couldn’t have imagined that thirty years later my own book would be published and go out into the world on June 21, 2022.

On that momentous day, I googled BURNING WOMAN, MEMOIRS OF AN ELDER to check out where it was being sold. I was amazed to see that it was available on Amazon, Barnes and Noble, Walmart and Powell’s, and even in the U.K., Sweden, Hungary, Japan and China. But that was only the beginning. I needed to do my own grassroots marketing starting with the four bookstores where I live in Calaveras County, and the neighboring counties of Amador and Tuolumne. 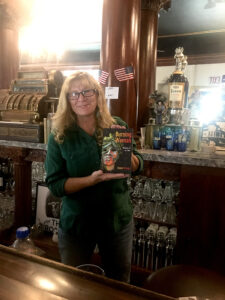 THE THIRSTY PROSPECTOR is a “family-friendly, family-owned pub and bookstore in downtown Sonora selling beer, books, and ice cream.” It looks more like a saloon. The historic building has a basement that was once an old mine shaft. In one corner, part of the mine is exposed and you can hear the trickle of water as you wander around the maze of bookshelves.

Linda greeted me and introduced her three grandchildren, who were doing their homework at the bar. I pitched my book and she said, “I’d love to carry it. The cover’s great. We specialize in old books, but welcome local authors.” I suggested, “How about displaying my memoir on this table near the bar for a month and see what happens.” She called the next day to order more books. The two I’d left sold that afternoon. It felt like I was off and running a race with the other 4 million authors whose books are published annually in the U.S. 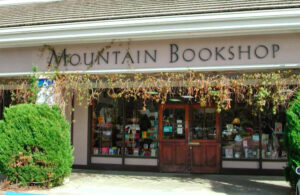 My next stop was MOUNTAIN BOOKSHOP just a few miles up Hwy 108 in The Junction Shopping Center. With Starbucks and a Wells Fargo Bank, it would have been at home in any suburban neighborhood. An arch of Virginia Creeper vines, burnt in the summer heat, framed picture windows on either side of the entry. Bathed in warm light, it smelled of new books. I asked for the book buyer and was introduced to a woman about my age. When I handed her a copy of my book and told her that it was a memoir about counter-culture aging, she gave me a knowing smile. “That’s lovely,” she said and placed her order with my distributor before I left. 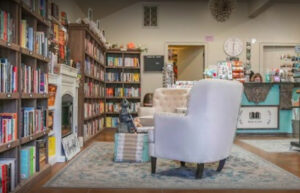 I stopped for lunch before visiting BOOKS ON MAIN in the town of Murphys. Nestled in a row of stone buildings from the gold rush era, the rustic exterior contrasted with an inviting interior. As if walking into someone’s living room, comfortable arm chairs were arranged facing a faux wood stove so people could stay for a while. When I introduced myself, the owner, Kirsten, already knew about my book and was happy to carry it. 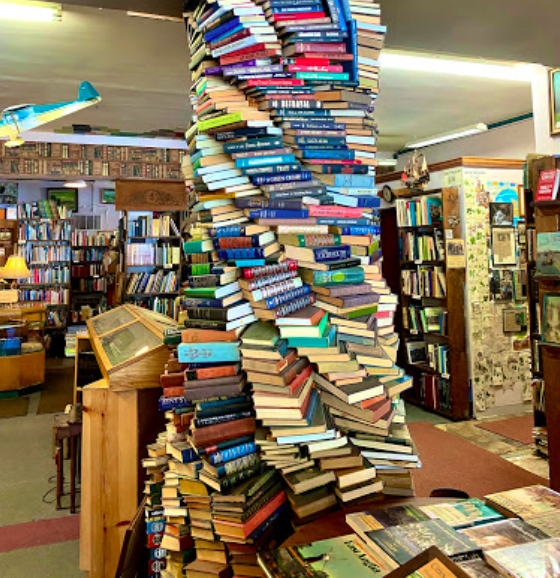 The next day, I had an appointment with Eric Hein, co-proprietor of HEIN & COMPANY in Jackson. I opened the door and crossed a threshold into what I imagined a very old bookshop in some obscure part of London would resemble. A man drinking a latte from the coffee bar and seated at a round oak table was totally immersed in his laptop. There were books everywhere. The delicious, musky smell of old books mingled with the aroma of fresh coffee was intoxicating. But the best part was an enormous column of books stacked from floor to ceiling as if commemorating literature. I wandered through a labyrinth of book cases until I found a burly man hunched over a desk. He looked up as if I’d interrupted him. Feeling a little disconcerted, I began to tell him about my book when he said gruffly, “Don’t be so formal. Just sit down and tell me what you want.” So, I did. He said, “We take books from local authors on consignment. I’ll take what you have. Bring more if they sell. You get paid at the end of each month” It was that simple. He laid three copies of Burning Woman on a glass case that held rare books and that was that.

I drove home singing the chorus to “Swimming to the Other Side” from my book:

We are living ‘neath the great Big Dipper

We are washed by the very same rain

We are swimming in the stream together

Some in power and some in pain

We can worship the ground we walk on

Cherishing the beings we live beside

We are swimming to the other side

I had just jumped into the river and it felt good.