I left work at 5 o’clock, heading North on J-5 a few miles out of Lockeford, a small agricultural town in the Sacramento Delta, destination Mendocino. My first book event for BURNING WOMAN Memoirs of an Elder was the next evening. I was invited to be on a panel of “Three Amazing Woman Authors” at the Gallery Bookshop. I felt excited, wired, and exhausted at the end of my work week, mentally double-checking to see if I’d forgotten anything. 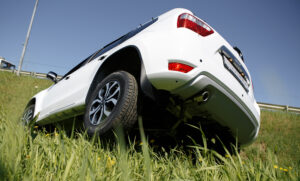 I was listening intently to a male Aussie voice on MapQuest when he hung up on me. Damn. I turned onto a side road and parked. Moving the map around on my phone like a tiny ouija board, I finally heard my navigator telling me to hang a U, go a couple hundred yards, and make a sharp right back onto the highway. I exhaled in relief and drove down the dirt road…when BAM! The car slammed to a stop! What the fuck? Had I turned too soon? I put the car in reverse. The wheels spun. I tried going forward in low gear. Nothing. I opened the door and stood on unsteady legs. My car was nose-down in a ditch.

I was too shaken to cry when a white pickup slowed down and stopped on across the highway. A burley man in a cowboy hat, baggy jeans, and short-sleeve plaid shirt walked toward me. “Looks like you got a problem.”

“I don’t know what happened. Musta turned too quickly. What a stupid thing to do…” I was babbling. My eyes searched his for answers. He began thinking out loud, “Wonder how to get you out. My truck’s not 4-wheel drive.” Then a second white pickup turned onto the dirt road and parked.

Walking toward us, a Latino man with close-cropped hair looked at me with concern. In the kindest voice he asked, “Mam…are you okay?”

“I think so. Thank you for stopping.”

As if it was a given, the two men started talking about how to solve my problem. That’s when my tears started, but I wiped them away and just listened.

“Could we pull her out?”

“I dunno. She’s pretty stuck. You got a tow chain?’

“No, but I think there’s a strap in my truck that might work.”

“It’s gettin’ pretty late…usually takes an hour or more for them get out here.”

They decided to try to get me out. The guy in the plaid shirt would drive my car slowly in reverse at the same time the other man would pull me out with the strap tied to his truck.

There is something beautiful about watching men at work. Solving a problem. Using an economy of words. Getting the job done. It’s a kind of chorography.

The man in the plaid shirt told me, “Stand over by that tree. You need to be out of the way.” I did as I was told. The plan worked. I felt such love and gratitude for those two men as I walked toward them.

“You guys are my angels.” I asked, “Do you give hugs?” when the man in the plaid shirt, thinking I was offering money, started to say no. I realized his misunderstanding and quickly said, “I thought about giving you money, but I didn’t want to disrespect your gift. I wanted to know if you give hugs.”

He grinned and opened his arms for a bear hug. “I never refuse a hug from a beautiful woman.” I gave the man with the soft voice a tender hug and said, “thank you” quietly in his ear.

The men walked to their trucks without a backward glance and drove away. I stood in the middle of the road savoring the moment. Then I got into my car and turned on the ignition. Miraculously everything worked.

After a restless night in an Airbnb, I woke up hungry and desperate for a caffeine fix. I knew that Booneville, less than an hour away, had great coffee. Driving a road that twisted and turned between vineyards and ranchland was like roller skating on the wheels of my car. I felt free. 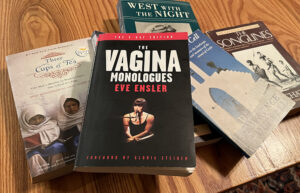 At the Mosswood Café & Bakery, the burnt-brown smell of roasted coffee was intoxicating. After placing my order, a stack of books on a side counter caught my eye. A copy of The Vagina Monologues was right on top. The author, Eve Ensler, broke the taboo against women naming this part of our body and talking about our sexuality. The book had inspired my immense painting, The Sacred Crack.

I enjoyed my latte and black berry scone almost as much as reading Gloria Steinem’s introduction. Returning my empty cup to the counter, I asked the server if the book was for sale. She looked questioningly at a woman about my age sitting at a table across the room. The woman interrupted her conversation with the man sitting next to her and asked, “What book do you want?”

I had never said the word “vagina” out loud in a public place before, but I nearly shouted “THE VAGINA MONOLOGUES!”

She smiled at me and said, “No. It’s yours,” as if we were co-conspirators.

I drove toward Mendocino, hypnotized by the winding mountain road, musing about this book that had just been given to me. I hadn’t decided what to read from BURNING WOMAN at my event, wondering what the audience would expect from an “amazing woman author?” It was intimidating. But after boldly shouting “The Vagina Monologues” in the Booneville coffee shop, my apprehension evaporated. I knew what I would share.

A week after the Women’s March following Trump’s inauguration, I was on fire to make art. The chorus from Leonard Cohen’s song, Anthem, had been playing in my mind since the election:

Ring the bells that still can ring.

There is a crack in everything.

That’s how the light gets in.

At the center of a 4’ x 8’ panel painted black, I started with the prehistoric symbol of a vagina, then made the folds of the labia and hooded clitoris anatomically correct. The colors announced themselves in my mind: rich shades of red, gold, and blue, with the “crack” that lets light in at birth an iridescent white. Then I thought, something’s missing. I saw protective wings fluttering above the image and the fire of female energy burning at the base. The painting came to life. It was my contribution to the conversation that Eve Ensler started.

At 6:00 PM I sat with two other authors facing a group of a dozen people. I was the first to speak. Leaning toward them, I said, “You’re not going to believe what happened this morning on my way to Mendocino…”