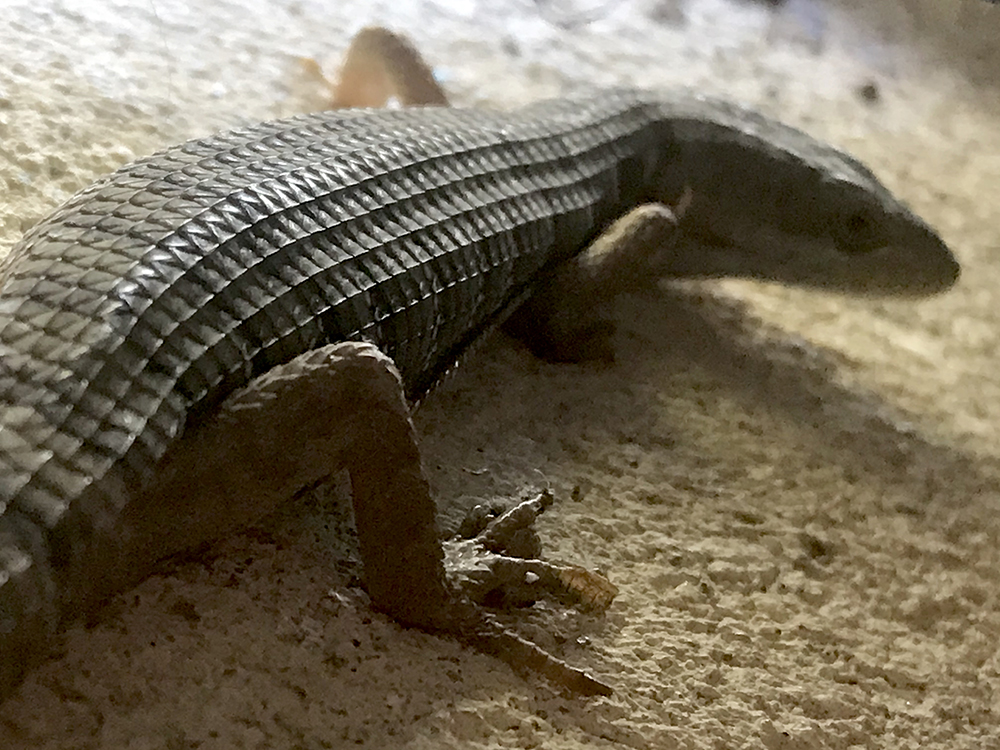 Lenny, where are you?

I had learned to talk to the lizard in a soft voice so I wouldn’t startle him. It was just a week ago, late afternoon, the time Lenny usually hunted for insects on the screen in my writing studio. I looked in the shady places on the window casement where he hid when the sun shone hot in the middle of the day. No luck.

The next morning, I noticed a large Styrofoam lid lying on the floor in the laundry room and picked it up. There was Lenny, sitting on a strip of cardboard packaging, resting peacefully in the shadow of the lid. I greeted him and left a jar lid of water nearby. Two days later he was still there. I was worried that he might be starving…or dying. Tears came to my eyes. In this time of sheltering-in-place, he’d become my familiar as I wrote on my laptop and had phone sessions with clients. I lifted him and the piece of cardboard up gently, and placed him on the window ledge in my studio. He didn’t budge. The next morning Lenny was still there. He turned his head slightly, looking at me with one beady eye. I whispered, “You need food…I’m gonna find you some.” 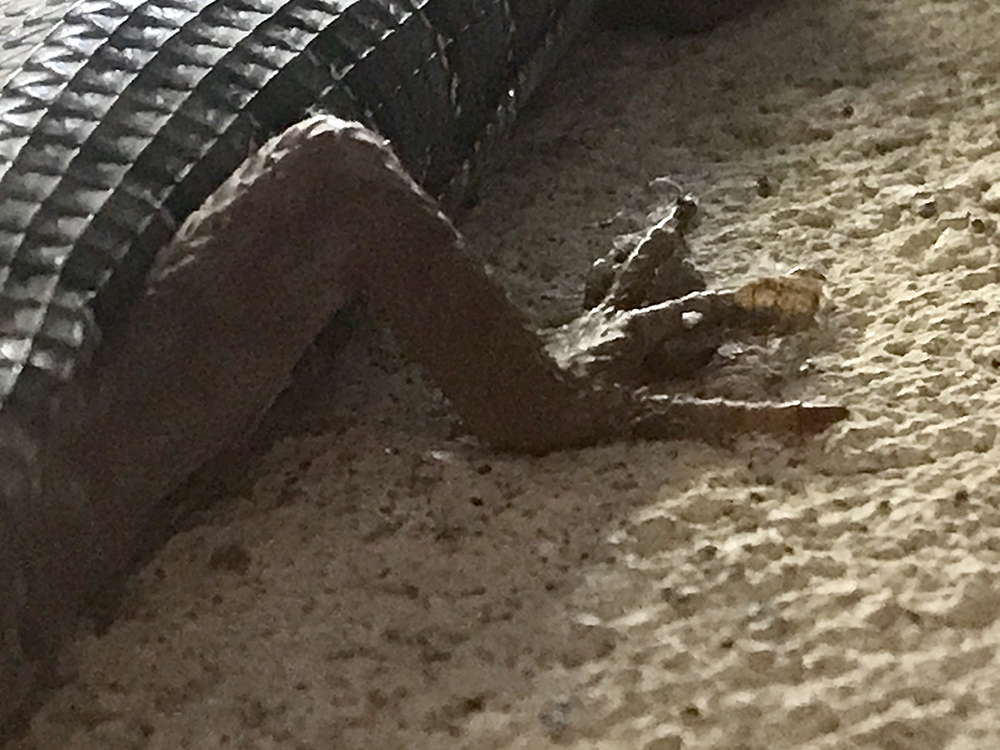 I turned over a dozen rocks in our garden and scanned the red earth for insects. After 15 minutes in the hot sun, I found two tiny pill bugs and brought them to Lenny. One of them got stuck on some sticky stuff on the cardboard and wiggled around. Lenny saw it but didn’t respond. That was weird. I touched the “sticky stuff” and could barely lift my finger off. Then I realized, oh my god…Lenny is stuck. Why didn’t I see that before? It seemed as if it was only on the right edge of his body and his right-hind-foot, but if I didn’t free him he would die! My heart pounded as I searched my mind for solutions. Nail polish remover…it’s a solvent. I located a bottle under the bathroom sink and used a saturated Q-tip to loosen the bug. It didn’t work. Then I found a sharp x-acto knife. It was messy, but I freed the bug. Lenny was next. I told him in a calm voice what I was going to do, like the dentist does before he puts sharp things in my mouth, and cut into the cardboard to free his belly. He tried to get away, but his foot and five delicate toes were still stuck. I cut away each toe, afraid that if I slipped I would amputate one. With the last toe, Lenny catapulted himself off the ledge, debris still attached to his foot. But he was alive.

For the rest of the day, I was uneasy and didn’t understand why. The heaviness was a stone in my belly. It was fear. That night after the lights were out, I curled into myself and cried quietly into the pillow so I wouldn’t disturb Tom. A memory from two years earlier came to mind:

I am laying on the cement floor in our living room on my left side and cannot get up. I think my hip may be broken. Excruciating pain is shooting down my left thigh. One minute I was rounding the corner of the couch to get my boots so Tom and I could go for a walk, the next minute, I was flat on the floor, unable to move. Scenes of what happened next flash in my mind: the 911 call, ambulance ride to the hospital, surgery, a year of recovery. And through it all, I never cried. I just did what had to be done.

I turned toward my husband and he held me as I cried, not needing to know why, patiently waiting. I told him how sad I was when I believed Lenny was dying, how scared that I would cut his little toes off…and how terrified I felt when I was stuck on the floor, unable to get up. With the tears came release. Telling Lenny’s story, and then mine, enabled me to make meaning of the experience.

There is a way that seemingly random events can come together, opening doors to understanding. Although Lenny was back in the studio and climbing up the window screen to hunt for insects, I continued to feel shaken by the memory of my fall, and the torrent of emotions unleashed in trying to free him. Why did it take so long for me to see that he was stuck? How could I just go about my life like everything was normal? Then I realized parallels with the COVID pandemic: my sense of being stuck in time and place, the loss of freedom, being afraid of hurting someone unintentionally, and trying to figure out how to live each day when nothing seemed normal. How can any of us feel the enormity of the pandemic, the threat it represents on a personal, national and global level? It is impossible. So, my pervasive sense of fear and helplessness stayed stuck somewhere inside me until an intimate experience with a wild creature I have come to love loosened it a little bit.