A ROCK GARDEN IN SPRING

It’s spring in the Sierra foothills. Our world is coming awake after the long night of winter. I began to feel creative sap rising in me, as if I was one of the gnarly oaks on our 20 acres that were sprouting tender green leaves almost overnight.

I wanted to design a rock garden. I’ve loved rocks since I was a kid. I don’t go out “hunting” for them. They call to me. I think it must be a kind of energetic attraction. Now I have about forty spread out on the garden wall. I know each of them by their weight and texture, size and shape, variations in color, and how they catch the light, not necessarily by their scientific names. I’m especially fond of the ones I find where we live: chunky quartz with veins of red earth, flat slabs of hard rock burnished in shades of ochre, burnt sienna and umber, and sharp-edge, green-black stones, polished like obsidian, that look like they would make good hand axes. I feel in relationship with them, as if our project would be a collaborative work of art.

The idea had been growing in my mind for months, just below the level of consciousness, a delicious churning. It reminded me of feeling life when I was pregnant, months before giving birth. I realize as I write this that I’m describing my creative process: gather the elements not knowing where the inspiration is going to go; follow my muse; trust the process. Part of trusting the process is to be aware of the anticipation building until I know it’s time to begin. On the last Friday in March, I awakened with a sense of the creative tension that balances on an edge between pleasure and pain that’s familiar to me. It was time. 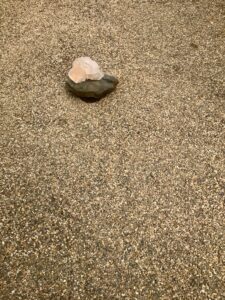 I had already prepared my “canvas,” an area of ground roughly 4’ x 10’ covered in crushed Lodi gold gravel I’d leveled with a metal rake. At the center I placed a quartz crystal on a stone worn smooth in the creek on our land. When I stepped back to get a perspective on the composition, the crystal glowed with an inner light, each facet reflecting the noonday sun in delicate shades of pink. It was a gift from two dear friends, Maryann and Marilyn, given to them by a woman named Dixie whom they had loved. They had said that they felt the crystal was not theirs to keep, and when I told them about my vision for the rock garden, they knew it was meant for me. 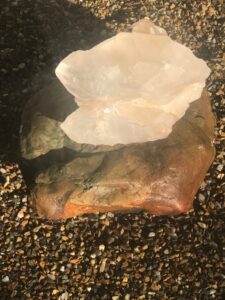 When I returned in the late afternoon, the crystal felt isolated at the center of empty space. I didn’t want to leave it that way and began placing smaller quartz stones spiraling around it. No. That’s not right. Was I was talking to myself or with the crystal? Then I envisioned an arc and positioned each stone as if caught at a moment in time doing a dance around the crystal. Yes! But it’s not complete. We needed another dynamic in counterpoint to the quartz…the jagged, green-black rocks. There were just enough, seven, the number of completion. I placed them in a second arc near the crystal.

The next morning just before sunrise, I slipped into my robe and slippers and padded out of the bedroom as quietly so I wouldn’t disturb Tom. Opening the front door, I walked into the rock garden entering sacred space. The silence seemed to vibrate just below the threshold of sound. It was elemental: earth, air, sunlight, the crystal shining, as was each stone in the two arcs, casting long shadows on the ground. We had created a poem without words, a koan that asked no question. It was simply itself…and beautiful. 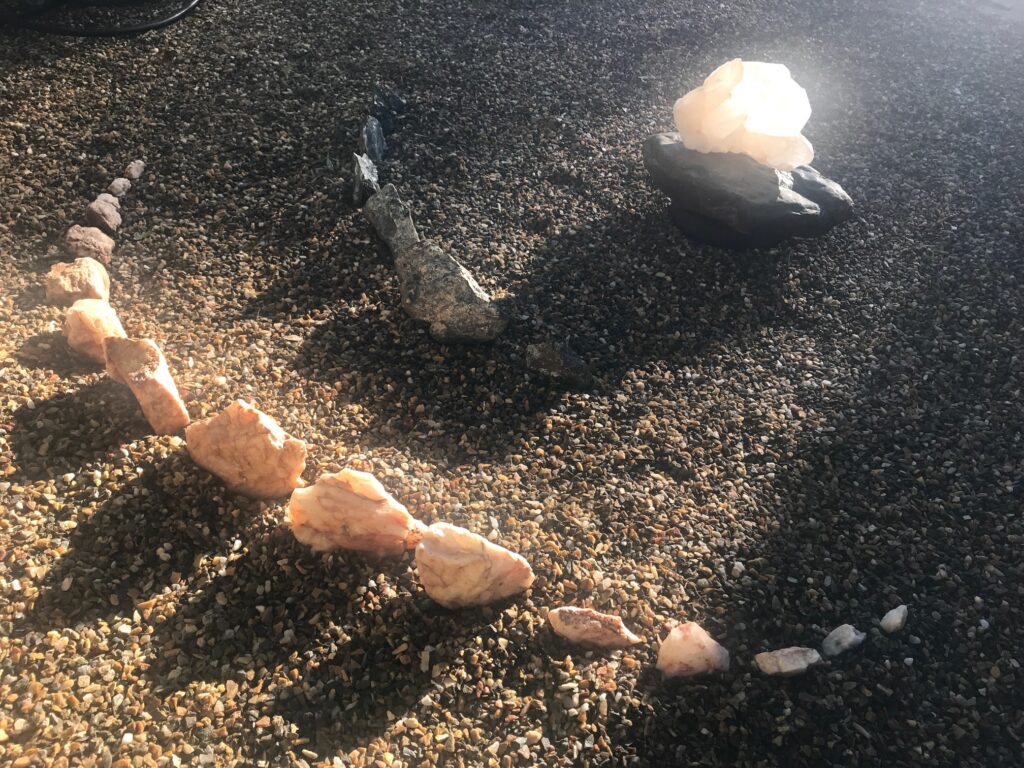