Our daughter, son-in-law and silver lab are coming for Christmas! It’s a lovely surprise. At the last minute they cancelled their holiday visit with my grandson in Heidelberg due to the Omicron surge. Tom and I planned a quiet day, just the two of us, having honored Winter Solstice on the 21st with beloved friends. But Don and Lisa coming released Christmas spirit into our midst like a genie out of the bottle.

Last night we went shopping for groceries at Save Mart. Tom hunted for a pork loin while I chose a Christmas tree from the forest of Doug firs in front of the store. For some reason, there were no lights on and no one came to help me, but I was intoxicated by the smell of pine sap in the chill night air, captivated by the ritual of choosing the “right” tree. 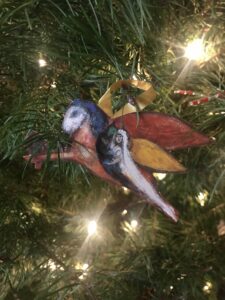 When we got home, Tom wound a string of tiny white lights around the tree and I spread our treasure of ornaments across the dining room table. One in particular caught my eye. I’d made it from a postcard of a Chagall painting two years earlier when we were on sabbatical in the south of France: a bride wearing a white dress and flowing veil rides on the back of a winged horse, clutching his mane. He holds her bouquet between his front hooves.  It brought back a flood of memories. It was the week before Christmas. We were going to be alone for the holiday…until we got a call from two artists we had met right after we arrived in France. Mireille and Ivan invited us to their family’s Christmas day lunch at noon.

Stepping across the threshold of Mireille’s home was like walking onto an opera stage set, deep red brocade walls, heavy drapes, and thick Persian carpets. Art was everywhere. Mireille’s dramatic figurative paintings evoked the passion of opera. And Ivan’s powerful portraits of homeless men and women compelled the viewer to stop…and see into our shared humanity. Mireille led us into the dining room and introduced us to her children, their spouses and her grandchildren.

Ivan had prepared the meal, served in small delectable courses, each paired with the perfect wine. The entrée was small rolls of veal in sauce with a stuffing of pork sausages. Ivan told us that in Italy it is curiously called “flown Birds.” Because I’m a vegetarian who eats fish, Ivan prepared a fish soup just for me. Dessert was petites fours,  tiny decorated presents one could eat, served with espresso in demitasse cups. Conversations bubbled all around me. Tom occasionally translated, but I did not feel left out. Following gestures, seeing happy, animated expressions on peoples’ faces, and simply listening to the music of the language, made me feel like I belonged.

By the time we said “au revoir” to our hosts and exchanged kisses, one cheek and then the other, night had fallen. Leaving Mireille’s apartment, we followed a narrow street to the center of Old Nice, drawn by the lights of an enormous Ferris wheel. What could be a better ending to this day? We bought tickets and got in line. 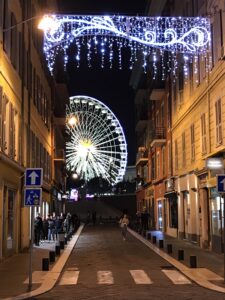 Snug in our seat, we felt ourselves lifted into the night sky, swaying gently, as the people below became smaller and smaller. Our movement around the hub of the wheel was majestic. I felt a thrill of danger, seeing us so tenuously connected to the hub by slender silver spokes. At the very top time seemed to stop. The promenade far below was a ribbon of lights skirting the Mediterranean Sea, midnight blue under a full moon. When we came back down to earth, it felt like Tom and I had come full circle…at the end of a magical day, a creative year, and a season in our life together.

I am struck by all that we have circled in the last two years as a human community: the pandemic, economic and political upheavals, the devastating impact of climate change around the world. And now, again, it is Christmas. We are preparing for the arrival of our family in just three hours.

I woke up this morning to the sound of oak trees outside our window, like wind instruments making music with the staccato pattering of raindrops. I could hear Tom in the living room tossing logs on embers in our woodstove to make a fire. The Christmas tree sparkled with lights. Five stockings hung from the mantle (including one for my 70-pound grand-puppy). We have come full circle and life, whatever it brings, is a blessing.

To honor our Christmas in France I wish you “Joyeux Noël,” and a blessed New Year.