HELEN AND THE 7 CHAKRAS

The call came in the middle of a therapy session. I let it go to voicemail. When I played back the message, a woman’s somber voice said, “Hello Sharon…I’m a friend of Helen’s. Her dementia has gotten worse. She’s unable to care for herself and has been transferred to the memory care unit. We’re clearing out her apartment this weekend. I understand that you are to have the chakra masks, so I’m calling to ask you to come get them.”

Helen was part of my chosen family. I knew this moment would come, but I didn’t think it would be this soon. 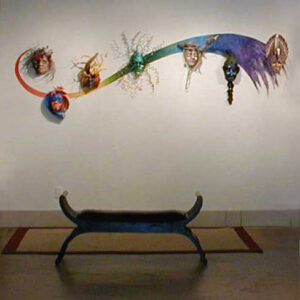 We met at the celebration of life for a young woman who had died in a motorcycle accident. She’d been Helen’s friend and my client. It was late spring and the gathering was informal, picnic tables underneath an enormous oak tree. As people shared stories that brought laughter as well as tears, I felt comfortable sitting next to Helen. Over lunch we talked about death as a part of life. I told her that I was a mask artist and had just completed an installation entitled The 7 Chakras, part of a kundalini yoga practice that focuses on seven energy centers in the human body. Healing comes through releasing blocked energy and restoring balance. She was fascinated and said she’d come by my gallery. The following week we sat together on a bench facing seven masks. As we shared our spiritual journeys, I discovered that we were both religious dissidents.

Helen purchased The 7 Chakras and fell in love with them. Over time they became her familiars, her companions, at the center of the last three homes she lived in. Helen lived alone. She had no close relatives or children of her own. Both parents had died from complications of Alzheimer’s. When she could no longer keep up her two-story log house in the Sierra foothills, she chose a retirement community near U.C. Davis that provided levels of care through end of life.

The chakras drew us together and remained at the center of our friendship. I would occasionally spend weekends with Helen. We loved dance performances at Mondavi Center and going out to dinner at her favorite Indian restaurant after the show. Over time she lost the ability to drive her car safely, ride a bike, walk without pain, or remember simple things. Anger, as well as fear, simmered just beneath the familiar rhythm of our conversation. Her last ride was a bright red, battery operated, “scooter.”

When I got the call, I hadn’t heard from Helen in three years. My calls, emails, and holiday cards had gone unanswered. On the way to Davis, I kept my sadness at bay. Knowing how proud Helen was, I knew that she wouldn’t want me to see her deterioration. I had kept my distance even though I missed her. Now, because of shelter-in-place restrictions, I wouldn’t be allowed to say good-by. Even if was possible, she would no longer recognize me.

At the retirement community, an officious-looking woman behind the front desk asked my name, who I wanted to see, and if I had permission to visit. I told her that I had come at the request of Helen’s friend, who had gotten authorization. She frowned at her computer. “There’s no record of this. You’ll have to come back another day.”

My voice rose. “I understand the protocol, but Helen’s just been moved to Memory Care.” The mask I was wearing muffled my words and clouded up my glasses. Trying to hold back tears I said, “I’ve driven two hours and was asked to come this weekend to take down my art. It’s in Helen’s old apartment. I made a promise to her…please…can you help us?”

An hour later, Helen’s friend was located and I was given a key to unlock her apartment. Amidst the chaos of packing boxes, stacked furniture, and tables covered with debris, Helen’s small apartment felt empty without her there to greet me. The seven masks hung on the wall where I’d placed them so many years ago. I searched their faces. Would they remember me? I had birthed them, but never felt like they were mine to keep. Kahlil Gibran in “The Prophet” expressed this perfectly:

They (your children) come through you but not from you. And though they are with you yet they do not belong to you.

The 7 Chakras had been Helen’s for fifteen years. When she moved to Davis she told me she had bequeathed them to my children in her will. Now she was giving them back until the time came when I would pass them on. Placing each one gently in its box for the trip home, I felt a deep connection to my friend, a bond of gratitude and of love.