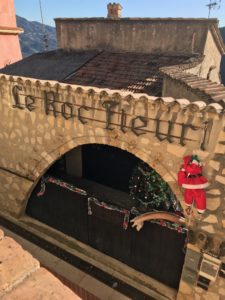 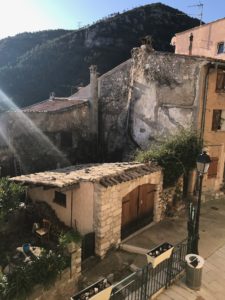 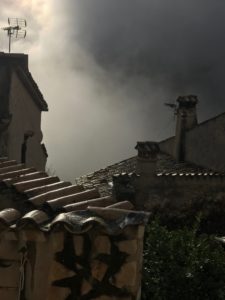 I sensed early on that living in a medieval village for two months in the South of France, writing the second draft of my memoir, would be an initiation. I could feel it beginning long before Tom and I drove to San Francisco, and boarded our flight to Paris.

I read Malidoma Some’s memoir, Of Water and the Spirit, several years prior to our trip. The heart of the story is about his coming of age initiation as part of the Dagara tribe in West Africa. Initiation is soul work, a way of being present in the journeys that change one’s life, and making meaning along the way. It is characterized by three stages: separation, ordeal and homecoming. Of the three, ordeal is the most difficult experience, plummeting into the unknown, and demanding all of one’s inner resources. The experience can be expansive and exhilarating. It can be frightening, depleting, and lonely. Ordeal crosses comfortable boundaries.

My initiation started with the dream of going to rural France for two months to work on the second draft of my book. It felt radical, and disturbing. I had never taken two months off work. Tom speaks French, but I don’t. We knew no one in the small, isolated village of Le Broc, but it was on my path. Although I had felt a similar calling before, climbing Half Dome in Yosemite with a buddy, trekking the Himalaya with a woman guide, and hiking the Andes with a group of spiritual seekers from Brazil, this felt different. Those experiences were physical, outward journeys. This one would be inward. But writing a memoir is by definition introspective, and I had been “introspecting” for eighteen months. What was there to fear?

Our trip from San Francisco took about twenty hours. Marie-Paul, the woman who owns our apartment, came by train from her home in Munich to welcome us. She was waiting for us in the pouring rain on the train platform in Nice. She hopped in the car, greeting us with “Bonsoir! Bienvenue!” and in perfect English, proceeded to give Tom directions through city traffic, and up winding mountain roads while he was relearning how to use the stick shift in our rented Citroen. I don’t have words to tell you how grateful I was to see the twinkling “Joyeuse Fetes” lights on the arched entry to Le Broc, wishing us a joyous holiday. It was midnight and the village was asleep. Streetlights illuminated the way to an old stone chateau. Thank god our apartment was on the ground floor. We were exhausted. Mary Paul had arranged for heat and lights to be turned on for our arrival. We didn’t notice the white roses in vases throughout the house until we woke up the next morning.

There is so much to share that I must be selective. My memories of our first two weeks are a collage of images and emotions. I’d like to scatter pictures across the page with captions to give you a sense of the kaleidoscope in my mind, but I’m not computer savvy enough to do that.

My office is a small room with a single bed, covered in a white quilt. My desk faces the window. Opening the curtain in the morning, I’m greeted by a toy Santa Claus climbing up the wall of an arched patio entry, with a stuffed giraffe peering over the gate. I imagine that our neighbors have children, but I’ve never heard them. A postage-size garden, lying fallow in the winter, separates their home from three other stone structures of varying heights, standing in a row. They look like medieval Monopoly houses, with tile roofs and heavy wooden doors. Even though it’s not visible from my window, I can hear the Catholic church bells ringing the hour. It feels like a monk’s cell, or the garret room in a seventeenth century stone house, except it’s warm, and perfect for a writer.

Before we could even begin our work, we had to take care of our essential human needs. We had shelter and water, but we had to hunt for and gather food. In France, the language is French, the medium of exchange is Euros, weight is measured in liters, temperature in centigrade, and distance is in kilometers, and everything is more difficult. Mary Paul had pointed out Carrefour, the French equivalent of Walmart, while we were driving to Le Broc. Did you know that you can call upon Saint Siri in France? She heard our plea and guided us to our destination. It was the most mind-altering shopping experience I’ve ever had. Carrefour is as enormous as an NFL stadium with a dizzying selection of everything. One whole section was devoted to seafood, piles of oysters on the half-shell, mountains of shellfish, and varieties of fresh fish laid out like jewels on black velvet. And the cheeses…just the seductive smells are enough to guide you toward them. The wine selection took up aisles, all French of course. In our jet-lagged state, it was a miracle we got out before the store closed.

The next day we slept until noon, too tired to do anything but make breakfast and wander around Le Broc. The bar on the corner was open, so we walked in and introduced ourselves to the owner, Christophe. There was a poker game going on in one corner, and a kid playing on his cell phone while his dad watched a soccer game with a couple other guys. Christophe was more fluent in English than I am in French, so I was able to order a glass of wine and ask where the toilet was. When I returned, he and Tom were in animated conversation while I listened. I am intrigued by the way French people speak with their hands. They smile easily. I enjoyed seeing Tom so happy to be speaking a language he loves. But, in my state of fatigue and cultural disorientation, I felt myself hitting bottom. I told Tom I was tired. He should stay and finish his glass of wine. I could find my way home. He asked, “Are you okay?” I nodded my head yes, and walked to the apartment, feeling like a child with no one to play with, left out and vulnerable. I knew that ordeal would be part of my journey. I just didn’t think it would start this soon.

The next morning, I woke up feeling defeated, but was determined to get back to my manuscript. When I opened my office window to breathe in fresh air, the weather matched my mood, dark and gloomy. I thought I could get by in Le Broc for two months, with smiles and my meagre store of French words, but it wasn’t good enough. I was depressed and afraid I couldn’t pull out of it. I told Tom.

He said, “Oh sweetheart, I’m so sorry. It’s hard for me, too. My French is enough to get by, but I have to concentrate to understand what people are saying unless they speak very slowly. Let me hold you. We haven’t been here a week yet. It’ll get better.” I sat on Tom’s lap, hugging him around the neck, and cried. It got better.

There is a positive side to this kind of isolation.  It’s quieter in my mind. Last night Tom and I went to a beautiful performance of Bach Cello Suites at a Catholic church a few kilometers from Le Broc. Before introducing the cellist, two people talked on and on about Bach’s spiritual devotion and the significance of the piece being performed at this holiday season. Even the French were getting restless. I just meditated, undistracted and at peace, a perfect preparation for hearing music that touched my heart.