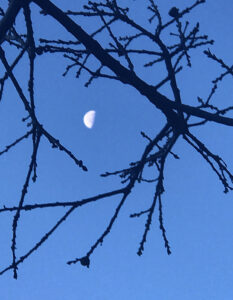 Fingers of sunlight had just begun to brush the horizon a delicate shade of pink when the hot tub called to me. Tom was still asleep. I slipped out of bed as quietly as possible, padded outside in bare feet, and sank into the warm water, steam rising in the chill air. Hearing the whispery whoo-hoo of an owl, I looked up to see a quarter moon caught in the bare branches of an oak tree. I felt peaceful, suspended between waking and dreaming.

Last Sunday was a special day. My grandson Quinten married the love of his life. I hadn’t seen him since he moved to Humboldt County with Kris, and I was looking forward to meeting the man he had become. He was eleven when his dad married my daughter Christa. Three years later the family moved to Calaveras County and lived just down the road from me. 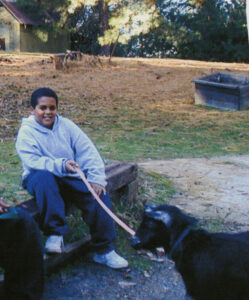 My favorite boyhood picture of Quinten was taken during a visit to my house. He’s sitting on a wooden bench holding one of my Pigmy goats, Jack, at the end of a leash. Puberty hadn’t hit yet, and his face still had the softness of childhood. We were just getting to know each other, and he was understandably wary of this grandma and her way of life that was so different than what he was used to living in the city.

Quint got his driver’s license when he was sixteen, but for a period of time, no doubt for good reasons I no longer remember, he was banned from driving his parents’ car. Then he came to me and asked if he could borrow my car on Saturday to see his girlfriend who lived in another town. I wanted to say “yes” because he was so earnest (and endearing), but checked in with Bill and Christa first. They gave the okay. We set some ground rules: drive safely, no drinking and driving, and bring the car back at the agreed upon time with gas in the tank. They worked for a while, but then he started coming home late. Warnings made no difference. He had broken my trust and I was disappointed. I had to pull his driving privileges. The grandmother saying “yes” was much more fun than the one saying “no.”

Then one stormy night Quinten called in distress. A friend’s car had broken down. Could he borrow my truck? The emergency was real. I said yes. Quint drove off in the pouring rain, his mind more on his friend’s crisis than on the road. Making a sharp left turn going downhill from Old Gulch onto Mountain Ranch Road, he slammed into a tree.

Quint walked away with no injuries, but he was shaken up and scared. He knew he could have died. Would I be mad? Would his parents put him on restriction? He said, “I’m so sorry grandma. I didn’t mean to do it,” while trying to hold back tears. Quint had a part-time job while going to high school, but here was no way he could pay for repairs. My truck was totaled but my grandson was safe. That was all that mattered.

I also remembered a kitten named Ahi, a tiny gray tabby with blue eyes. Maybe she was part Siamese. Quinten had fallen in love with her but his dad was allergic to cats. Could Ahi live in my art studio? “She’ll be no problem grandma. I’ll feed her and clean the litter box. I’ll take her out to play every day. Please grandma…” and held her out for me to hold. What could I say but yes. Anybody who’s raised kids knows what I’m talking about.

One Saturday morning I slid open the glass door to my studio. Ahi sidled up to me and rubbed against my ankle. The floor was strewn with cat toys, wads of paper, paint rags and brushes. It smelled like cat piss. I put Ahi outside and started sweeping the deck when I saw our family dog, Romeo, come loping up the dirt road. A shock of alarm ran through my body. Oh no…Romeo doesn’t run free. I tried to head him off calling, “Hey Romeo! Come here boy!” but it too late. He’d seen the kitten and ran toward her like she was a stick that had been thrown for him to fetch. She was in his mouth before I could get there, shaking her like a toy. I yelled “Stop!” and he dropped the limp body. I grabbed his collar and took him back to the house. Then I knocked on Quentin’s bedroom door. “Quint…Ahi was out playing…I didn’t know Romeo was loose. He got her. I’m so sorry.”

We ran to where the kitten lay on the ground. Quint cradled her in his arms. His words were muffled by tears. “I just need to be alone for a while. Romeo didn’t mean to hurt her…he was just bein’ a dog. It’s okay grandma. It’s not your fault.” After a time, Quint found me. He’d wrapped Ahi in her blanket. We dug a hole on our land and buried her, marking the spot with a heart-shaped stone. We said a few words, hugged each other, and cried.

It was almost noon when we pulled into the driveway at the home of Kris’s parents. Two horses grazed on pasture land in front of their ranch house. A shaggy brown dog came out to greet us. The ceremony would be outside because of Covid. Kris and Quint had spent the morning weaving together twisted manzanita branches to make a delicate bower, an archway under which they would say their vows. Kris’ brother, who had observed them working on it, commented that it must be held together by love because it seemed so precarious. Folding chairs faced the bower with baskets of white daisies and lavender iris at the end of each row.

Quint had grown up. He was not only the groom but also the host. He was much taller than when I last saw him, lean and handsome in a dark suit with purple shirt and tie. For a boutonniere, he’d stuck a tiny arrangement of iris in his breast pocket. I could tell that he was nervous, but he welcomed guests with a solicitous cordiality. Quinten had always cared about others, but now he seemed especially attentive, wanting this day to be as meaningful to others as it was to him. 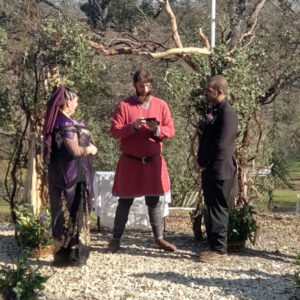 The ceremony was modest, presided over by Kris’s brother wearing a red Renaissance Faire tunic. He’d recently got his minister’s ordination online just for this occasion. Music played from a cell phone as the bride walked down the gravel aisle on the arm of her father. Quinten waited under the arch with his father, who was best man. Kris was beautiful in a long purple gown with gold threads that caught the light, her face covered by a purple veil. Looking like a figure out of an art nouveau painting, she took her place facing her beloved. The couple seemed young, yet also brave. In their vows they spoke of their love for one another and the family they would create.

Seventeen years have passed since I met the eleven-year old Quinten. For a while, in his late teens and early twenties, his life seemed precarious. Slamming my truck into a tree wasn’t the only “crash” he’d experienced. At times we worried that he would lose himself, as some young people do, when confronted by the demands of adulthood. He and Kris still had growing to do and big challenges ahead, but I was touched by their utter sincerity in wanting the best for each other. It was a good beginning

We had come from far and near. Quint’s grandma Penny from Lodi. His mom and her husband had driven through the night from Southern California. Christa and Bill flew in from Colorado Springs. We were woven together like the branches of the wedding bower. Most of us would never meet again, but for this sacred moment, we came together as family.